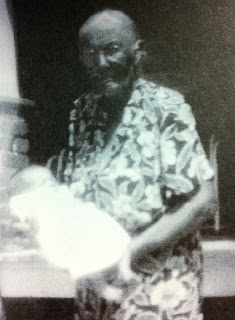 Nannie holding one of her great-grandchildren.
It's a miracle I'm here. Really, it's amazing the trials and tribulations generations of families go through over the centuries and here we are. Today, on this Thanksgiving, I am thankful for the hearty men and women who built this great country and made my existence possible. For some reason, one in particular sticks out today, Nancy "Nannie" Holloman, born in 1874.
Nannie's story is one of strength I will never possess. At the age of sixteen, she left her family in Wayne County, NC to travel with a preacher and his family west. She was an unusual girl in her rural community of farmers, in that she had been to school and could read and write. Nannie was to be the preacher's children's teacher. The rest of the story is a bit cloudy. This is what we know from the few things she said over the years and the facts I could dig up through public records.
The preacher's family made it to Pulaski County, Arkansas in 1890. Sometime within approximately two years of arriving, Nannie had a son and a daughter. The daughter was my great-grandmother, Flossie Elizabeth, born in 1892. Nannie would never say much about the circumstances of the births. Family legend says she married and something happened to her young husband. There is no record of a marriage or birth for either child. I know, because I have personally thumbed through all the birth records for this period in the Arkansas archive. Records of births were not always recorded, so we take her word for where and when the children were born.
At some point, the eighteen-year-old mother decided to come home. With a child barely toddling and one on her hip, Nannie Holloman walked from Little Rock, Arkansas back to her home near the coast of NC. She stopped in Memphis to pick cotton, earning money for food and the rest of the journey. Onward she trudged for months, taking rides on wagons when she could, and nursing those babies through it all. It is a miracle that she made it back with both of them healthy.
Unmarried and unable to care for the children alone, she gave them both up for adoption, with the stipulation that they always know who she was. My great-grandmother, Flossie, was taken in by a childless couple living just a mile down the road. Everyone always knew Nannie was Flossie's birth mother. Nannie married and had more children, but played a big part in Flossie's life, especially after her adoptive mother passed away. Nannie outlived her daughter, dying in 1955 at the age of 81, seven years after Flossie.
I am told that Nannie was a quiet woman and that most people would never believe she was strong enough to do what she did. I can't imagine the willpower it took to walk all those miles with her children, but I am so glad she did. It is because of this act of uncommon strength and many more, by the ancestors that came before me, that I sit here today. There are other stories I discovered through my genealogy research that by some small miracle my family line survived. I am thankful today for my family, crazy and whacked out as it is. Fore, it's their blood that flows through my veins and I can only hope some of the incredible strength of my amazing ancestors. Thank goodness for small miracles.
Posted by R. E. Bradshaw at 1:09 PM