I was invited to participate in the #MyWritingProcess blog tour by fellow author Barb Winkes. Every author answers the same four questions about his or her writing process and then tags someone else to continue the blog tour.
These are my answers:

#1 What am I working on?
I just published the fourth novel in the Rainey Bell Thriller Series, Colde & Rainey. We are renovating our house. In between tearing out plaster and lathe, I’ve been working on a short story. I’d like to keep the details quiet on that one for the time being, but I will be moving on to several projects I’ve had in the works for some time. This summer, I hope to complete the Civil War novel based on the life of my family member, the original Rebecca Elizabeth Bradshaw. The jury is still out on whether she was a lesbian or not, but like the characters in my other novels her sexuality does not define her. Her incredible life was told to me by my relatives, who exclaimed often, “You are just like Decky Bradshaw.” I can only hope I have the courage and fortitude she left as her legacy. Toe to toe with General Sherman in April of 1865, Decky Bradshaw’s actions were heroic and worthy of being remembered. The war she fought was not for her country, but for her family’s survival.
#2 How does my work differ from others in the same genre? I have written in several genres; romance, romantic comedy, mystery, thriller, and dabbled in historic fiction. When asked what I write, I generally answer mystery/thriller, as I have more of those than any other genre. I’m not sure that I’m all that different from others on that shelf, at least I hope not. As opposed to most thriller  protagonist, mine are always women and lesbian, but those are simply descriptive terms and not the essence of the character. Like John Sandford’s Prey series main character Lucas Davenport's family is important and we see him interact with them, but the criminal investigation is paramount. I’d like to think that my character’s sexuality is no more integral to the story than Lucas’s. As we advance into the post DOMA world, characters, particulary in the gay and lesbian fiction categories, will change with the political climate. There will always be homophobia, just as race discrimination still clings in portions of our society, but we will move on to novels that don’t require a sexuality label on our genre fiction. “She has a wife” will mean no more than “she has a husband.” I try to write that way now, ignoring the pulp fiction roots of lesbian literature, and moving on to an assumption that thrillers with lesbian protagonist should sit on the same shelf with Patterson, Cornwell, and Sandford.
#3 Why do I write what I do?
I have a vivid imagination and time on my hands. I was in that state for much of my childhood. I spent a lot of time alone, reenacting the scenes from the copious amounts of books my mother provided for us. Before we could see over the counter at the library, my brother and I had library cards, and spent many hours attempting to read all the books we could reach.
I explained to someone recently that life passes in front of me in moments, and that at anytime I am subject to pluck a moment from time and create a story in my head about it. Strangers have played out there lives in my imagination, for it seems my mind is constantly in need of a good story. Attention Deficit Disorder plays a huge part in that, and instead of a curse, I see it as a tool to creating worlds of my imagination.

So, when a moment passes and my mind creates a compelling story, I write it. The romances were generally generated from song lyrics; the Decky and Charlie adventures from living with the funniest woman in the world. The Rainey Bell Thrillers can be explained by my lifelong obsession with criminal investigation and behavioral analysis. It also explains why, while in New York and passing a large suitcase on the trash pile at the curb, I immediately heard a voice say, “There’s a story in that bag and probably a body.”

#4 How does my writing process work?
I begin with characters. I’ll see them in my mind and hear their voices. No, I’m not insane, but I do listen and watch as my mind plays out scenes for me. When I understand what it is that character wants to say, I begin to write. I generally know where I’m starting and ending, but I fly by the seat of my pants in the middle. The Rainey Bell series is a bit different, because I have to know where and when to plant the clues, so a pathway is essential. With the other books, outside of the mystery genre, I let them take me where they will. Sometimes the story will stall out or reverse course. If the writing doesn’t come easy, then I know something is wrong. I can struggle for days and then get hit with the answer while washing dishes. 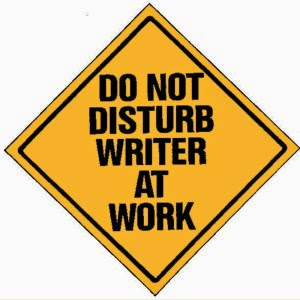 I am fortunate that writing is my job. I write everyday. It may not be for a book, but I write. When a novel is coming fast and furious, I am subject to binge write. I have to watch the clock and force myself out of the chair every two hours for exercise and nourishment, but I will write for weeks on end. My wife, whom I appreciate beyond measure, assumes all responsibilities for our household during these weeks, as I am unable to vanquish the hold the fictional world has on me. To break away to reality is out of the question, because I must know how the story unfolds. I eat, sleep, and breathe with my characters until the tale is written.