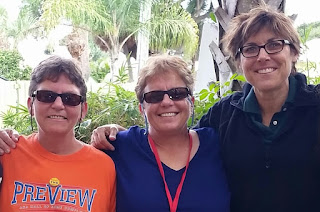 I doubt there is a soul reading this blog that doesn't already know we lost Sandra Moran too damn soon. Her life has been memorialized in the words of family, friends, colleagues, students, and anyone she touched. Sandra had a wide reach and her loss is palpable in the air. The energy was strong with this one.


Sandra and I didn’t talk much about each other’s books. We had some short exchanges about research, but we really didn’t get into deep conversations about our individual works. We did discuss what we thought made a good book, where we wanted to be as writers in a few years, and the direction we each saw LGBT literature heading in the changing landscape of social acceptance. Much of the time, though, our conversations were of the non-literary nature. 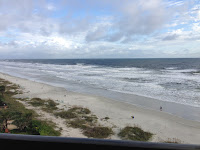 My most memorable private exchange took place over breakfast in New Smyrna Beach in 2014. With the sun just beginning to warm the white sands below us, we gazed out the restaurant window over steaming cups of coffee and gushed about the women we were bonded to without question. We each acknowledged how lucky we were to have found the one great love of our lives. Beyond any other aspect of my friendship with Sandra Moran, her devotion to her wife was the most endearing. That is the source of my deepest sadness. My empathy is informed by the knowledge Sandra so deeply loved Cheryl.

I read through the entire thread of my private Facebook chats with Sandra going back to the very first.

I was shocked that it was not that long ago when we began talking.  I came across the following conversation, which was quite typical of our exchanges: 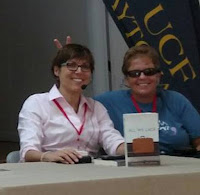 Me: I found a rock, well, it doesn't look like a rock, that's why I stopped to look at it. It came out of the riverbed that runs through OK City. I swear, there are teeth or a broken antler sticking out of this rock. 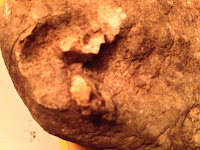 Sandra: I'm actually on a run right now but when I get back to my computer and able to look at it in closer detail I'll let you know what I think it is. I think it's pretty cool

Me: great. thanks
enjoy the run

Sandra: It’s funny that you replied at that moment because I was just looking at it.

Sandra: I was going to say that it was likely some kind of sea thing that got compressed in the rock before it hardened

Me: Of course, if it had been a priceless artifact, I would have just ruined it.

Sandra: hahahaha That's part of the fun of discovery, though!!!

I will miss these exchanges. It is an amazing tribute to Sandra that she made so many people feel important in her life. She made a difference in our lives. Deb and I decided to remember Sandra as she was that day on the beach, headphones in, wet hair from sweating, as she returned from a long run—running right past us and the hotel where we were all staying.
After we watched her run until she faded from sight, mixing in with the distant beachcombers, Deb and I looked at each other, shrugged and said, “She’ll figure it out. She'll find her way back.”
We'd like to believe she's just still running, figuring it out.
Until our energy mingles again...run on... 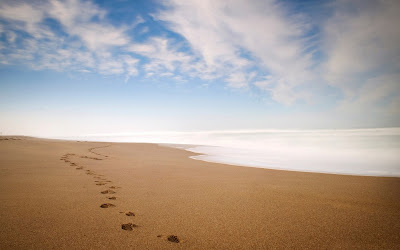